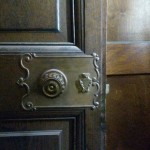 The McEwan Hall at Potterow is undergoing a  major refurbishment (£33 million cost). The doors are being removed to be brought up to modern fire regulations and then refitted. The Contractor came across two locked doors that had to be opened. They had called out two other Edinburgh Locksmiths in the hope the doors could be opened with a non-destructive entry. These other Locksmiths said the doors could only be opened by drilling a hole in the lovely old lockplate. They called us out and we opened both doors non-destructively with a couple of bent wires just like it would have been done when the doors were first fitted.

What is Non-Destructive Entry?

This is where the lock is opened without any damage to the lock or door it is fitted to. This can be more difficult with the latest Insurance Approved mortice locks but it can still be possible. Most lock-outs we get at Edinburgh Locksmiths Capital Lock Services are just doors closing behind people and they are only locked-out on a Yale lock. We would be very disappointed if we had to destroy a basic Yale lock to get it open. Snibbed Yales although more difficult should also be opened using non-destructive entry.

Non-Destructive Entry means no extra time on the job fitting new locks and no hassle for you to get extra keys cut, you can re-use any spares you may have inside the property. It may take longer but can work out cheaper for the customer.